February 16. 2020. Abuja. The Lassa fever death toll has risen to 70, the Nigeria Centre for Disease Control (NCDC) said on Tuesday.

The Nigerian health agency, in its weekly situation report on the status of the disease, said since the beginning of the year, more suspected and confirmed cases have been reported.

In the reporting week, it said there were 482 suspected cases of the disease with 104 new confirmed cases and eight deaths reported.

The number of new confirmed cases increased from 104 cases in week five to 109 cases. 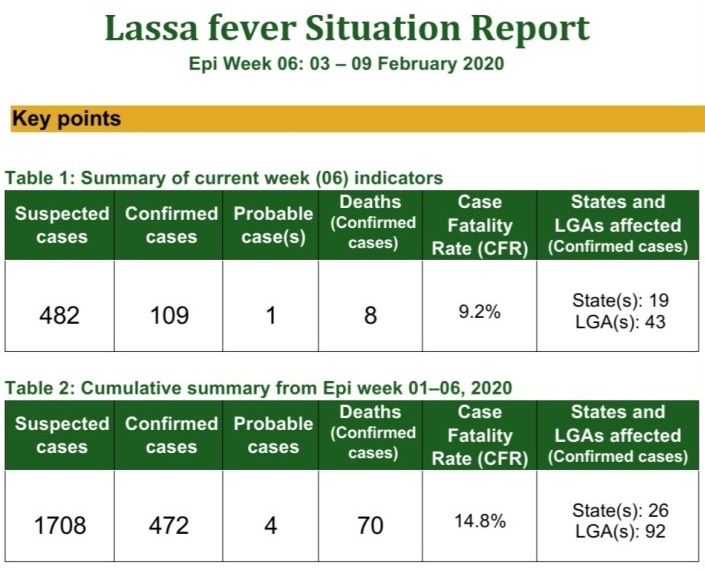 Of these, four new health workers were affected in Ondo, Delta and Kaduna states in the reporting week six.

This latest statistics implies that there is an increasing spread of the disease across the country.

NCDC said, cumulatively, from week one to week six, 70 deaths had been reported with a case fatality rate (CFR) of 14.8 per cent.

Of these, 74 per cent of all confirmed cases were recorded in three states: Edo, Ondo and Ebonyi.

Predominantly among the age group infected are those between 21-30 years. Also, the male to female ratio for confirmed cases is 1:1.2, same as previous week.

For week six, there has been a significant increase in the number of suspected cases compared to that reported for the same period in 2019.

Nigeria since the beginning of the year has been battling with the scourge of the Lassa fever outbreak which has now been reported in 26 states.

The disease has become an epidemic in the country as it has become a year-round outbreak with cases rising from November and peaking by May.

The disease though treatable, still records a high number of deaths and confirmed cases.