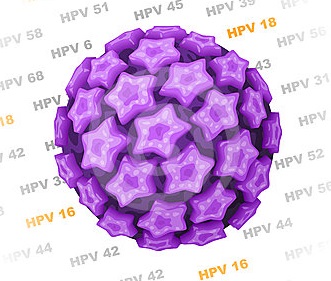 A study published in 2016 reported that close to 8 out of every 10 young women under age 30 years evaluated in Kwazulu-Natal, South Africa tested positive for HPV genotype in cervicovaginal lavage indicating extremely high HPV infection risk.

Human papillomavirus (HPV) is one of the most prevalent sexually transmitted viruses and more than 100 strains of HPV have been identified. Of these about 40 types are known to infect the reproductive tracts of men and women. Eighteen types; in particular, HPV 16 and HPV 18, are described as high-risk cancer causing types, and have been associated with the development of cancer of the cervix, vulva and vagina in women; cancer of the penis in men, and cancers of the anus, tonsils, oropharynx, and base of the tongue in both sexes.. The low-risk, non-cancer causing HPV types; mainly types 6 and 11, result in genital warts

Globally, the prevalence of HPV among women with normal cervical cells is around 12%, whilst in Africa, south of the Sahara, the rate is much higher at around 24%, ranging from 17.4% to 33.6%.

Young women below age 25 years bear the highest burden of HPV infection at prevalence of 19.2% globally, reaching a high of 43.9% in Africa in the same age group.

Risk factors for HPV acquisition globally and more so in Africa have been difficult to assess conclusively, but available data so far points to risky sexual behaviors, particularly early sexual debut, multiple sex partners, lack of condom use, early pregnancy and possibly hormonal contraceptive (HC) use.

A 2016 study in Kwazulu-Natal, South Africa set out to address the vital information gap regarding specific risk factors for HPV acquisition and the prevalence of HPV genotypes among young women in the community.

The study obtained 224 cervicovaginal lavage (CVL) from a population of 594 sexually active HIV negative black women in age bracket 15 – 30 years with mean age of 21 years. The women were primarily enrolled in an ongoing HIV related study. The CVL samples were tested for HPV genotypes at one or more time points in the study. CVL testing was blinded for other demographic, behavioral and HIV infection status.

Women not living with their partner had significant higher HPV infection with the high-risk HPV genotype strains.

Study concluded the prevalence of HPV infection in sexually active women above age 18 years is extraordinarily high in the study location of Kwazulu-Natal, pointing to need for “determined efforts to rapidly roll-out, scale up and maximize on use of the effective HPV vaccines in preventing HPV acquisition, crucial to decreasing morbidity and mortality”.

Acknowledged limitations of the study with implications for generalizability of findings to women in South Africa and sub-Sahara Africa generally include small sample size, use of self-reporting surveys with consequent participant biases in efforts to study association between HPV infection risks and sexual, behavioral and social practices. Other limitation relate to sample testing on stored materials with potential risk of sample degradation and sampling inaccuracies.

Despite these limitations, study authors believe that study findings justify assertions made in their study conclusion.