Nov. 22. 2019. Prescription drugs in the United States rank as the most expensive by a long shot, a report published this week has found, with the average cost of medications in the US exceeding the global median price by some 300 percent.

The study by digital healthcare provider Medbelle - based in the United Kingdom - reveals substantial differences in prescription drug prices around the world.

The US was followed by Germany and the United Arab Emirates (UAE) as having the most expensive medicines, while Kenya and Malaysia have the cheapest. 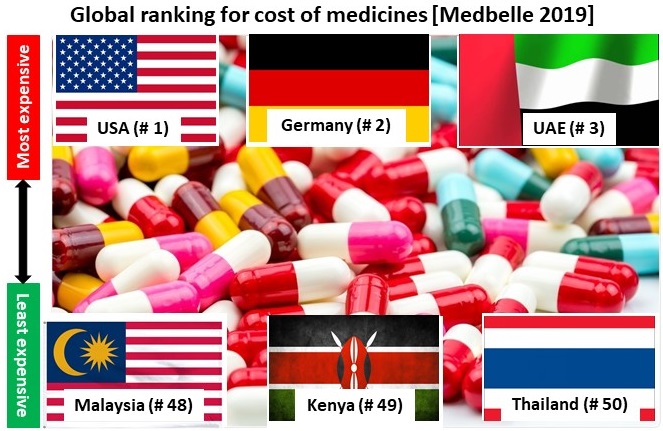 The index compares the affordability - or lack thereof - for the same drugs across 50 countries, showing how prices in each nation deviate from the global median.

"The medications chosen for comparison span a variety of common conditions: from heart disease and asthma, to anxiety disorders and erectile dysfunction," said a press release accompanying the study results.

"The average prices of both the brand compound and their generic versions were included in order to have a complete profile of each medication," it added, saying that the dosage size was also normalised.

Of the 13 vital pharmaceutical medications that were evaluated on a dollar-for-dollar basis - whether paid by individuals or care providers - blood pressure drug Lisinopril (branded as Zestril) showed the greatest deviation in the US, with a price tag that exceeded the global median by some 2,682 percent.

A long list of potentially life-saving medicines are extremely costly in the US when compared with world averages.

Xanax, which is prescribed to treat anxiety and panic disorders, costs 2,568 percent more in the US. Prozac, used for depression and other mental illnesses, is 2,124 percent more expensive in the US than the world median.

Insulin - critical for managing diabetes, is also priced far higher in the US than elsewhere.

"Americans pay around five and a half times more than the global median for life-saving [insulin]," said Daniel Kolb, cofounder and managing director at Medbelle.