When Adeniran Chukwuemeka (not the real name) died one year ago, his family - unusual for an African family, was gracious to disclose his cause of death. It was colon cancer (also commonly referred to as bowel cancer).

‘Niran died, aged 62. He was a doctor and distinguished public health specialist.

His family felt that disclosing his cause of death will help to raise awareness about colon cancer in the community he grew up in and worked.

According to ‘Niran’s wife, her husband had been complaining of irregular stooling, occasional tummy pains and seeing blood in stool off and on for well over a year prior to his death.

“He believed he had hemorrhoids and considered his busy work-life schedule were to blame for his complaints”, said ‘Niran’s wife.

Even for a doctor, it never crossed ‘Niran’s mind that his complaints could indicate a more serious ailment. So, he never sought medical attention until it was too late.

By the time ‘Niran eventually visited his doctor to complain, he had started having more frequent and troublesome abdominal pain. The sighting of blood in stool were more consistent and sometimes continuous.

Eventually, ‘Niran was diagnosed with colon cancer for the first time three months prior to his death.

At the time Niran was taken to surgery, it was discovered that he had very advanced stage colon (lower bowel) cancer that had spread to involve many organs in his abdomen and his bones.

“My husband’s doctor told me after his death, that ‘Niran could have been saved from bowel cancer if he had come up with his earlier complaints one year ago”, said ‘Niran’s wife.

“I urge everyone, male or female, in mid-life stage with history of any bowel complaints to go and get a doctor’s checkup regularly”.

“Early detection could have saved my husband”, she said.

What is colon (or colorectal) cancer?

Colon cancer is a type of cancer that begins in the large intestine (colon). About 65% of colon cancers occur in the rectum/sigmoid colon area and 15% in the ascending colon (see illustration). The colon and its different parts form the final part of the digestive tract. 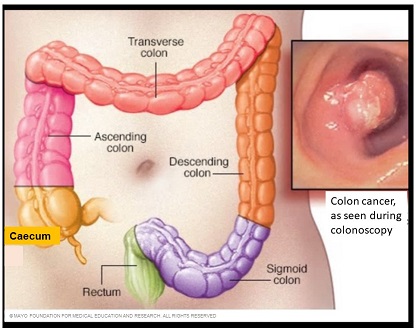 Image showing different parts of the colon. Any part can be affected by colon cancer, but the recto-sigmoid colon is affected most. Image credit: Mayo Clinic

In Sub-Sahara Africa, colon cancer is considered to be the 5th commonest cancer with an estimated incidence rate of 4.04 per 100 000 population (4.38 for men and 3.69 for women).1 This is very likely an under-estimation.

Colon cancer typically affects older adults, though it can occur at any age. It usually begins as a small, noncancerous (benign) growth of cells called polyps that form on the inside of the colon. Over time some of these polyps can become colon cancers.

Polyps may be small and produce few, if any, symptoms. For this reason, doctors recommend regular screening tests to help prevent colon cancer by identifying and removing polyps before they turn into cancer.

What are the early symptoms of bowel cancer?

As in the case of ‘Niran, the symptoms of bowel cancer can often be subtle and don’t necessarily make you feel ill.

More than 90 per cent of people that are diagnosed with bowel cancer will have one or more of the following symptoms:

Most people with these symptoms do not have bowel cancer.

When should you see a doctor?

If you experience one of more of these symptoms and they persist for more than four weeks, you are best advised to visit your doctor.

The cause of colon cancer is not known. In general colon cancer like most other cancers start when healthy cells develop abnormal changes (mutation) in their DNA. A cell’s DNA contains a set of instructions that tells the cells what to do.

Who is at risk?

While the exact cause of bowel cancer is unknown, there are a number of factors that can increase your risk, including: