Lagos, February 15, 2020. Nigeria recently declared a Lassa Fever outbreak in the country. This followed the increase in the number of Lassa Fever cases reported in states since the beginning of the year, the Nigeria Centre for Disease Control said.

This is coming on the heels of the Lassa Fever International Conference held in Abuja to mark 50th year anniversary of the discovery of the disease in the country.

Each year, Lassa Fever kills many and leaves most of its survivors with disability, often due to the side effects of the drugs they received.

The viral disease is contracted from ingestion of food contaminated by the urine or  the feaces of the multimammate rat and often transmitted via human to human contact.

NCDC in a press statement released on Tuesday said there has been an increase in the number of Lassa Fever cases reported from many states across the country since the beginning of the year.

Recent epidemiological data showed that this trend usually occurs during the dry season, between January and April.

“As at January 13, a total of 60 confirmed cases have been reported in eight states,” NCDC said.

Declaring an outbreak means the NCDC has activated an Emergency Operations Centre (EOC) to coordinate a response.

The centre said in preparation for this year’s emergency phase, the agency has been providing support to states including the provision of emergency supplies and deployment of Rapid Response Teams (RRT).

This, they said, has been going on since 2018 when Nigeria experienced the largest reported case of the outbreak since the history of the disease in the country.

Though the disease is more prevalent in Edo, Ondo and Ebonyi states, 20 other states recorded at least one confirmed case across 93 LGAs. 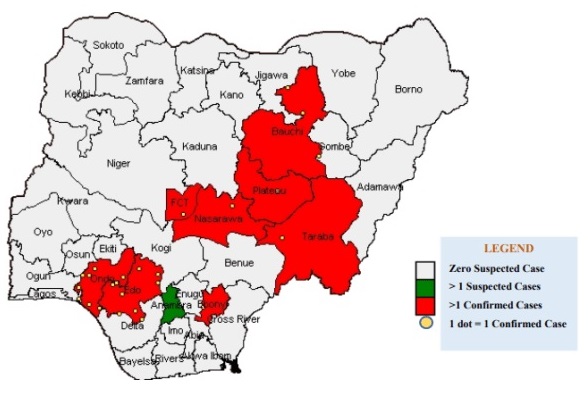 “Since the Lassa fever outbreak in 2018, NCDC has worked with states to ensure better preparedness and improved response. In the last one year, guidelines have been revised, new data management tools have been developed and the laboratory network has been strengthened. Additionally, risk communications has been strengthened through radio, posters, flyers and social media,” it said.

“A national research plan has been developed, to enable its full integration into the outbreak response to gain a better understanding of the disease”, NCDC said.