What your nails say about your health

Nails: Beyond fashion statement to health

Especially for women worldwide, nails are often regarded as art and fashion statement and the considerable amount of money derived from the nail treatment industry worldwide including Africa attests to this. However, your nails are far more than a platform for bright colors and nail art. 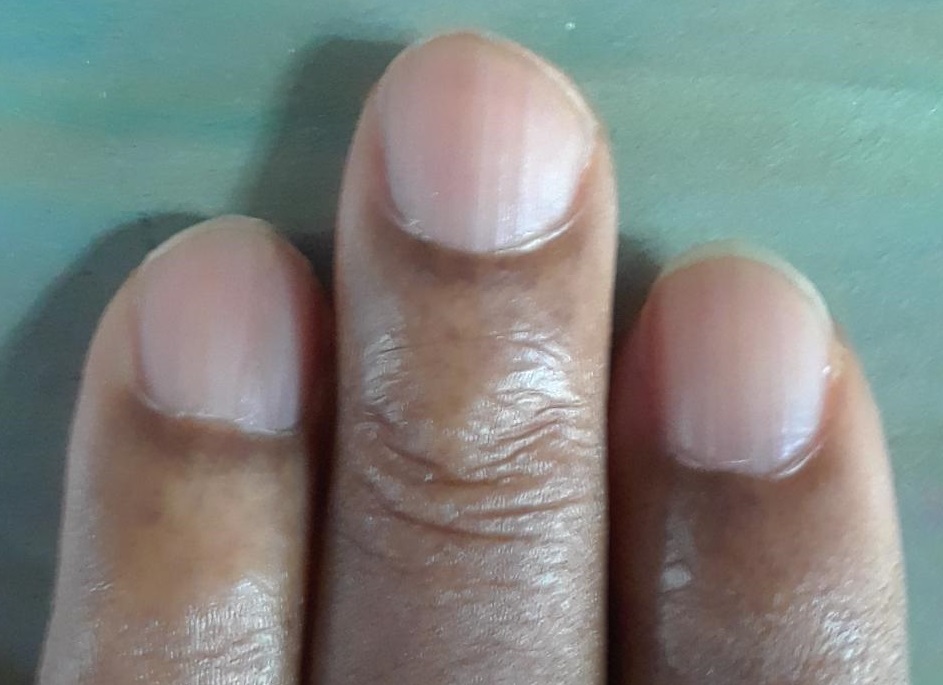 Nails as windows to health

The shape, texture, and color of one’s natural nails act as a window into our health status. While some nail symptoms are harmless, others can be indicative of acute or chronic diseases, including cancer.

Healthy nails grow, on average 3.5 millimeters (mm) a month, but this is influenced by nutritional status, medications, trauma, chronic disease, and the aging process itself. So, growth rate of our nails may give clues about our underlying health status also.

Any significant changes in one’s nails, including swelling, discolorations, or changes in shape or thickness, should trigger a visit to a doctor. It could be nothing, or it could be well worth the visit to have a diagnosis to an underlying condition like say, undiagnosed diabetes mellitus.

We present 10 nail signs and what they say about your health.

If your nails are thick, crumbly, and yellow, a fungal infection could be to blame. Less unusually, yellow nails may be related to thyroid disease, diabetes, psoriasis, or respiratory disease. On the other hand, nails may go yellow with age or due to long standing use of nail polish in women. Smoking can also stain nails with a yellowish hue (the so called “smoker’s nail”).

Lifestyle factors may play a role here, such as if you have your hands in water a lot (washing dishes, swimming, etc.), use nail polish remover frequently, are exposed to chemicals (such as cleaning products) often, or live in a region with low humidity. Other causes of cracked, brittle nails include, age, poor nutritional status, iron deficiency, low vitamin A, C, and or B, fungal disease and thyroid disease, especially hypothyroidism.

Clubbing describes the situation when fingertips become enlarged and the nail becomes curved downward. It can be a sign of low oxygen in blood due to lung disease. It can also be related to liver or kidney disease, heart disease, inflammatory bowel disease, and AIDS. The exact cause of nail clubbing is unknown. 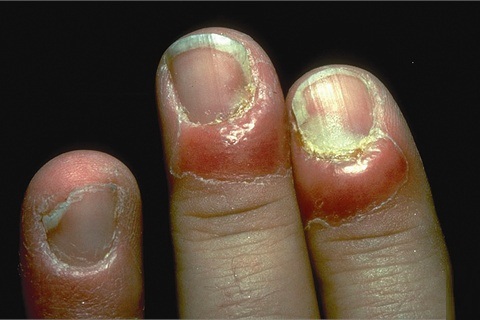 An infected nail may come in various forms. One form is medically called Paronychia. Paronychia is a nail disease that is often very painful and caused by bacterial or fungal infection of the hand or foot, where the nail and skin meet at the side or the base of a finger or toenail. The infection can start suddenly (acute paronychia) or gradually (chronic paronychia). Risk factors for paronychia include repeatedly washing of hands and trauma to the cuticle such as may occur from repeated nail biting. 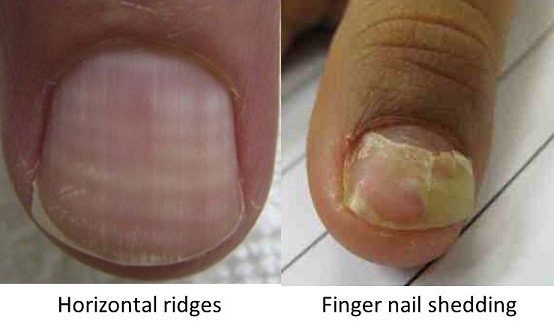 Horizontal ridges and idiopathic finger nail shedding (medically known as Onychomadesis) may be caused by trauma to the nail bed (or nail matrix) where the nail is formed  or a serious illness with a high fever. A type of horizontal nail ridges, known as Beau's lines, may be due to psoriasis, uncontrolled diabetes, circulatory disease, severe zinc deficiency or complications of chemotherapeutic agents. Another type of horizontal line is known as Mees' lines, which are horizontal discolorations. Mee's lines may be due to arsenic poisoning, Hodgkin's disease, malaria, or leprosy.

Vertical ridges are typically a normal sign of aging and are usually not a cause for concern. They may become more prominent as one gets older. In some cases, vertical nail ridges may be due to nutritional deficiencies, including vitamin B12 and magnesium.

However when vertically ridged nails start to thin and get a sandpaper look the condition is medically known as Trachyonychia. Trachyonychia has been associated with diseases such as eczema, psoriasis, alopecia areata, lichen planus and atopic dermatitis.

Nail that curves upward at the edges, taking on a spoon-like appearance, is known medically as Koilonychia. It may be caused by trauma, exposure to petroleum solvents or it may be a sign of iron-deficiency anemia, hemochromatosis (excess iron absorption), heart disease, or hypothyroidism.

Black streaks and painful growths on a nail warrant an immediate trip to a physician, as they may be due to melanoma, the deadliest form of skin cancer.

9. White Nails with a Strip of Pink

Nails appearing with isolated white discoloration or white with narrow pink strip at the top, are known medically as Leukonychia. This can be harmless and sometimes caused by minor injuries to the base of the nail (the matrix) where the nail is formed or simply a sign of aging, or psychogenic stress. Whitish discoloration of the nails may be partial or total. When it is total and affects all fingers, it could be a sign of liver disease, congestive heart failure, kidney failure, diabetes and lead or arsenic poisoning and more. 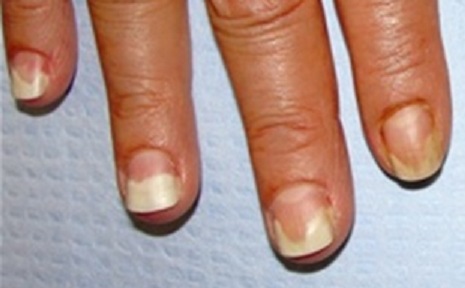 This condition in medical terms is referred to as Onycholysis. It can occur with exposure to environmental factors like chemical irritants, trauma, drugs, infections - both fungal and bacterial, or disorders like hyperthyroidism, psoriasis, lupus or other connective tissue diseases.

Onycholysis is also known as Plummer’s nail. It can occur on any finger, but often occurs on the ring or little finger. The nail separates itself from the nail bed and the lifting can happen at its tip towards the cuticle, or from the cuticle or nail matrix towards the tip.