Condom use and accessibility in Nigeria

In commemoration of the International Condom Day (ICD), NOIPolls in partnership with Aids Healthcare Foundation (AHF) Nigeria and the National Agency for the Control of AIDS (NACA) conducted a nationwide public opinion poll regarding condom accessibility and use in Nigeria.

The survey revealed that an overwhelming majority of adult Nigerians (92 percent) are aware of what a condom is and what it is used for. This is heartwarming considering the pivotal role condom plays in family planning and in safe-guarding people against STDs and other infections.

With regards to perception and attitude on condom, 63 percent of Nigerians stated that the first thing that comes to their mind when they hear the word condom is sexual pleasure, while 45 percent disclosed that they instantly think of promiscuity when they see someone with a condom.

When asked if condom should be free, 61 percent said yes, while 39 percent answered negatively. Of the proportion who think it should not be free, 36 percent specifically mentioned that it should be sold ?50.00.

With regards to the preferred outlet to purchase a condom, a larger number of the respondents (69 percent) preferred to access condoms from either a chemist or pharmacy. 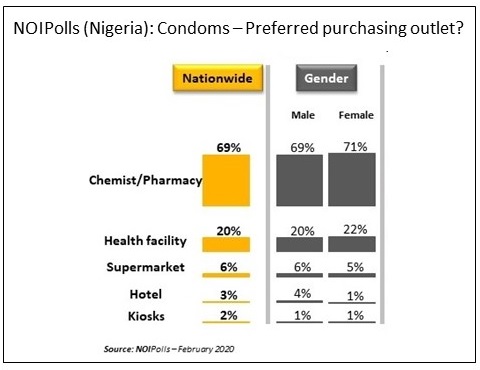 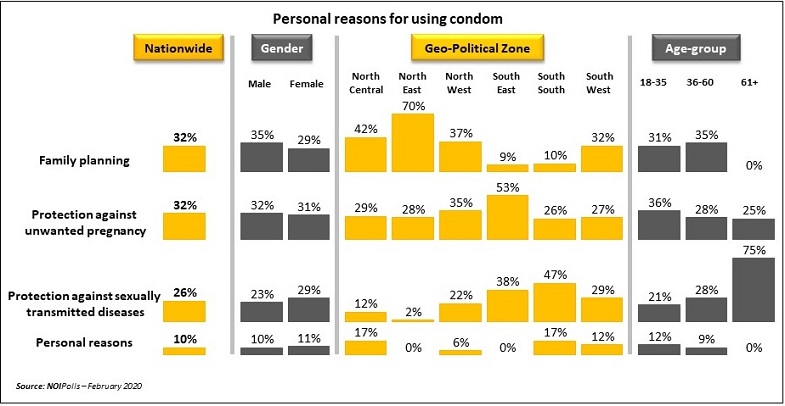 Of the 66 percent of the general population that stated that they do not use condom, the main reason cited by 34 percent was that it is against their religious belief. Analysis by geographical location showed that the North-West region (78 percent) and the North-East region (74 percent) had more respondents who said that they do not use condom. It is important to note that 17 percent of those who do not use condoms say they do so because they either do not like it or that it is not pleasurable and the South-West (25 percent) and the North-West (24 percent) had the most respondents who stated these reasons.

Lastly, to foster publicity of condom in the society, 52 percent of the respondents believe that it is appropriate to promote the use of condom to Nigerians form the age of 18, while most of the respondents (78 percent) disclosed that they are likely to recommend the use of condom to someone. Therefore, it is important that advocacy groups and other concerned stakeholders create awareness on the negative effects of not using condom as emphasized by 58 percent of the respondents. This awareness should be centered more on Nigerians who believe it is against their religious belief and those who believe it promotes promiscuity. Interventions such as providing free condoms could also help increase the level of consistent condom use in the country for effective prevention of HIV and STDs, especially for individuals who find condoms to be inappropriate.